His accomplishments were also impressive in 2006, as he had skied down Pisco Peak(5,475m) in the South American Andes, and climbed the southwest face of Alpamayo Peak(5,947m) with success. From the year 2010, his main sponsor had become the Peak Performance. As the Spyder who had been his sponsor till then, Yamaki’s accomplishments within the past recent years seems to have caught the eyes of the people at Peak Performance.

And within the year of 2010, Yamaki had increased his number of accomplishments with his expedition to Bolivia. He had skied down the Huayna Potosi East Fas(6,088m)  in the mountain range of Cordillera Real, and had skied down the slopes as steep as 70degrees in angle from the stunning peaks of the Pequeno Alpamayo(5,370m) in the South American Andes.

Yamaki had accomplished a lot during the last decade, such as climbing up and skiing down many treacherous big mountains graciously and skiing off of many great peaks within his countless risky expeditions. And yet, he goes-on for more. 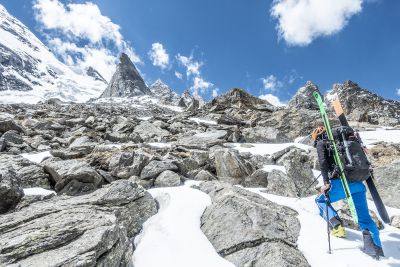